WESTWEEK 2011 at the Pacific Design Center 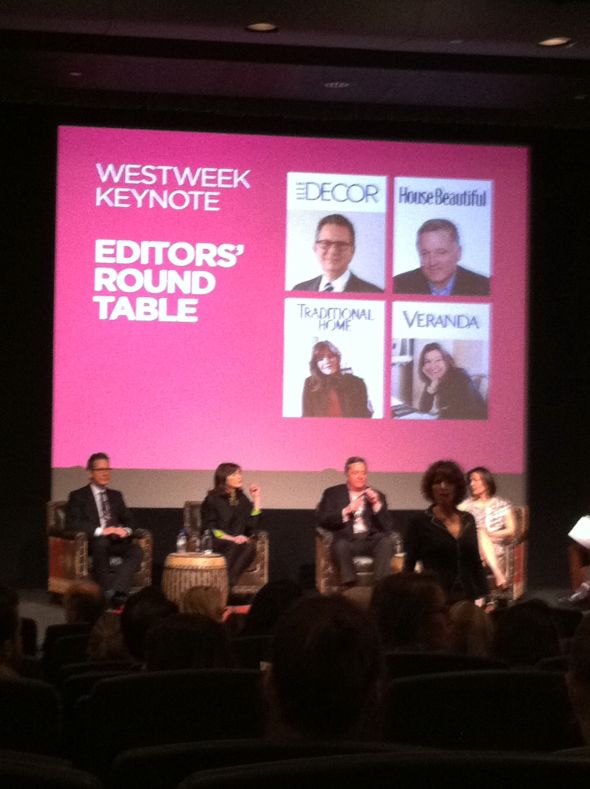 This week, LA’s Pacific Design Center was home to the forums and showrooms of WESTWEEK 2011 (March 22-26), one of the leading events for design professionals.

The Secret Agents managed to squeeze into the PDC’s packed SilverScreen Theater on Tuesday (it was so full, latecomers had to stand for an entire hour) to hear a keynote panel discussion from professionals in the design editorial world. Editors-in-Chief Michael Boodro (ELLE Decor), Newell Turner (House Beautiful), Ann Omvig Maine (Traditional Home), and Dara Caponigro (Veranda) imparted their morsels of wisdom and experience to a diverse crowd, ranging from seasoned, old-school designers to eager, new-school bloggers.

Discussion topics covered everything from the use of social media as a business platform for designers, to how someone could get their work into one of the editors-in-chief’s publications.  It was great to hear the panel’s perspective on these subjects, especially from magazines that have managed to stay afloat despite the harsh conditions of today’s economy.  (Especially loved Michael Boodro’s witty quips and frank responses during the Q&A portion with the audience!)

The WESTWEEK 2011 schedule was chock full of receptions, opening parties, forums, and products to see.  In between events, we had our own fun looking at various installations throughout the PDC (like artist Olek’s cozy crocheted bedroom, in the low-quality photo above – courtesy of my phone), and dining at Wolfgang Puck’s contemporary restaurant, red | seven. 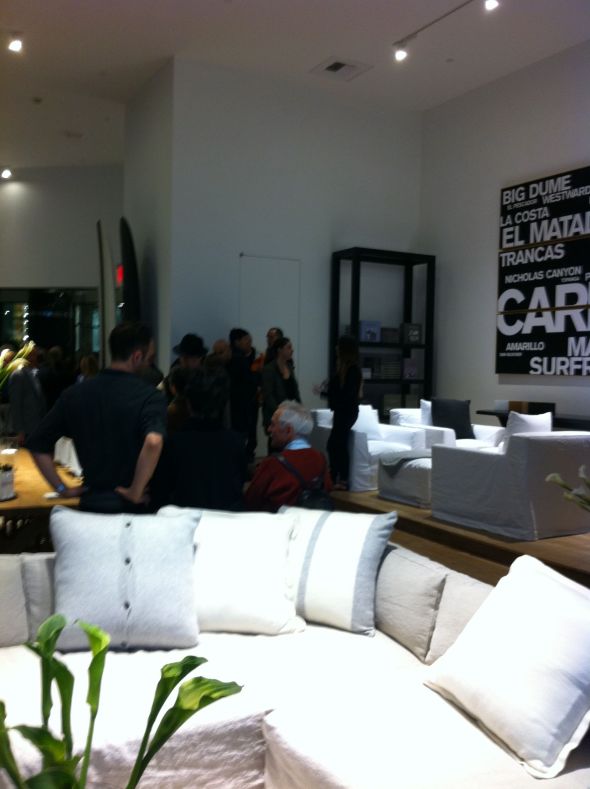 The Secret Agents ended our night at an opening party for the new James Perse furniture showroom.  Sleek lines and simple design evoked the casual, timeless philosophy embodied in the brand’s clothing line.

With so many things to see, it’s not too late to check out WESTWEEK 2011 – head over to the Pacific Design Center tomorrow, Saturday March 26, for the last of the WESTWEEK festivities!

With all this rain and strange weather, the Estria Foundation isn’t just raising awareness about water issues these days – they’re experiencing it.  Thankfully, the skies stayed dry long enough for the Foundation’s public Water Writes mural unveiling in downtown Los Angeles this weekend.

For two weeks, a team of graffiti artists worked tirelessly (up until 1AM on the morning of the unveiling!) to produce a vivid work of art that will be permanently displayed on the walls of KIPP LA Prep. A collage of images – including a bespectacled octopus, a native Alaskan-inspired whale, and plastic bags floating like jellyfish – make up “Cuidela,” the first completed Water Writes mural.

The literal Spanish translation of “Cuidela” means “take care of it” – a call for people to address water rights issues within their respective communities, and to care for this precious resource that is shared by all.

For more photos from  Saturday, check out Estria’s gallery on Flickr! 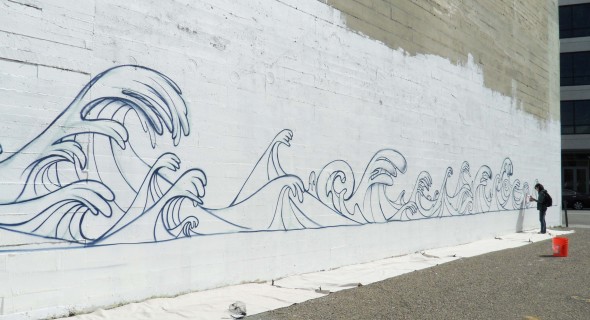 Sunny skies, old-school jams, and buckets of technicolor paint.  Throw in some veteran graffiti artists, a blingin’ boombox, and free food to the mix (can’t go wrong with a dozen boxes of pizza), and you’ve got yourself a pretty awesome Saturday afternoon!

Two of our very own Secret Agents were in Oakland over the weekend to help kick off the Estria Foundation’s “Water Writes” campaign.  Over a hundred Bay area locals came out for the public paint party, and did a great job of leaving their marks – literally – on the wall (and in some cases, on each other).

The Oakland mural is just one of a series of public projects that the Estria Foundation will be completing over the course of ten months, in countries all across the globe.  Each artwork will depict water rights issues in various communities, in an effort to raise awareness of the growing water and sanitation crisis around the world.

Coming up next for the Estria Foundation is the unveiling of their first completed “Water Writes” mural at KIPP LA this Saturday, March 19.  Can’t wait to see what the final product looks like!

Photo via UnBeige, courtesy of Albert Ferreira for Sundance Channel

Shamefully for a publicist, I don’t actually spend that much time in front of the boob tube (apart from late night binging on Investigation Discovery and the occasional re-run of the RHBH). Maybe Sundance Channel‘s new design-focused reality TV will beckon me back.  From the descriptions, it sounds like crack for design nerds.

For fashion fans, Garo Unleashed and All on the Line promise to be ripe with drama and dripping with product.  Then there’s the American Idol for designers, Quirky. Will Ben Kaufman will be to product designers what Kelly Ripa is to housewives with sock slots?  My guess is that if the products proposed actually end up solving some kind of problem and not being completely wasteful, this could be pretty rad.  Personally, I can’t wait to catch Ludo Bites America. How will Middle America react to the Frenchman’s own brand of “bistronomy”?  Oh, and what reality TV line-up would be complete without its own platinum-maned diva?